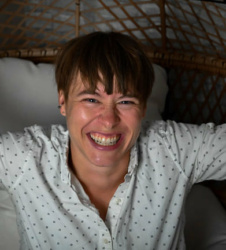 Colleen O’Doherty has her MFA in play and screenwriting from the University of Nebraska at Omaha. Her plays have been part of many festivals, including: Bold Dorothy, Retired, as part of Br!nk Briefs at Renaissance Theaterworks, 2017 in Milwaukee; Northern Bound, a play co-written with Michael Oatman, was part of Station Hope at Cleveland Public Theater in Cleveland, OH in May 2017; Ricky and Ready was in Heartland Theatre Company’s 10-minute Play Festival, Normal, IL, June 2019 and Secret Theater’s Act One: One Act Festival, NYC, February 2020, where it made it to semi-finals. It was also part of the 2020 Stage It! 10-Minute Play Festival at the Center for the Performing Arts Bonita Springs, where it won “Audience Favorite.” It was part of Fargo/Moorhead Community Theatre’s yearly 10-minute festival, January 2022 and was part of the Think Fast festival at The Theatre Project in New Jersey, March 2022. Sister of Experience was produced with the Centers for the Arts Bonita Springs 2020 Stage It! 10-Minute Play Festival, where it was also published as part of their yearly “Stage It!” collection. Her Zoom-based play, Missing Ingredient was selected for NYC’s Project Y Theatre Company’s Zoom series and was released in November 2020. It was also nominated for best short in the first annual Young-Howze Theatre Awards, February 2021. Saul was produced as part of the Warner Theatre festival in April 2021. Her play, Stripped, was a quarterfinalist for ScreenCraft’s 2018-19 stage play competition based out of LA and a 2018 Henley Rose Playwright Competition for Women Finalist. It was part of TheatreMidwest’s Fresh Produce Concert Reading Series in October 2020 in Des Moines, IA and a 2020 semi-finalist for UP Theater’s Renewal Reading Series in NYC. Her newest full-length play, Stories: on the Brink was produced by Anastasis Theatre Company as part of the Great Plains Theatre Commons in Omaha, NE in fall 2021. Her screenplay Power Surge won quarterfinalist for the genre category of ISA’s “Table Read My Screenplay.” She is also a writer for the children’s television show, Mister K’s Clubhouse.