More Than a Muralist 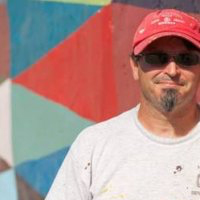 All across Omaha, building walls and large, flat stretches of vertical concrete are giving way to washes of vibrant color that reflect the life surrounding them.

Mike Giron is a part of that movement. The New Orleans native – a painter, graphic artist and educator – has completed more than a dozen murals in the city, either on his own or as part of a collaboration. His latest effort, completed last summer, was a partnership with WhyArts artist Jennifer Radil and several community groups on an old concessions building in Benson Park. “Our design concept was directly influenced by the dynamic lines of the park’s new accessible playground,” he said.

Giron’s interest in large-scale works dates back to his New Orleans roots when he began painting Mardi Gras parade floats in the early 1990s. His eventual progression to murals in public spaces was fueled by a variety of his wants – making art accessible, promoting stylistic variety within the art form, enhancing environments, supporting local business, mentoring new mural artists and giving voice to communities that are often unheard and overlooked. 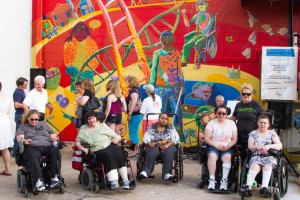 A case in point: the Diversability mural, another of Giron’s WhyArts collaborations. The design of the mural, located on the back wall of the Tip Top Thrift Shop in downtown Benson, was based on the generation of ideas and imagery developed by a team of artists from WhyArts and clients from the Munroe-Meyer Institute at the University of Nebraska Medical Center, the Ollie Webb Center, Quality Living Inc. and VODEC. When it came time to execute the design with paint and brush, the four client groups also were invited to take part.

In spite of his considerable contributions to Omaha’s growing mural culture, to label Giron as a muralist would be shortsighted. The artist likes to experiment with a variety of forms, including process-driven mixed media, oil painting, community projects, graphic design and printmaking. When he’s not working outside, you can find him in his midtown studio, an 800-square-foot space in the basement of his home. Half houses his art supplies and equipment, and the other half functions as his creative zone.

“My work spans the spectrum from realism through abstraction and from richly textured compositions to clean graphic design,” Giron said. “It most often hinges on the tension between chaos and order, formidable complexity and quiet, singular elements, which reflects, to me, the nature of our existence.”

Sometimes, his work comes to him in a vision. “I remember one time I was driving south of 42nd Street near Center, and I was really stressed out about global warming and asking myself what the point of making art was,” Giron said. “The image literally popped into my head – a painter sitting on a heap of ruins with reds and sunset colors in the background,” he said. “The Future of Painting,” a 2010 work that hangs in his living room, is the literal execution of that vision.

The vast majority of the time, though, Giron finds inspiration in the process of creating art and “letting it lead you to interesting results,” noting that it’s the most meaningful when he finds a spiritual or personal connection to the subject matter.

His current WhyArts project is a collaboration with Hunger Free Heartland, an Omaha nonprofit dedicated to building a hunger-free community. “I see a lot of folks who are hurting in my neighborhood, and I know people who have been on the street,” Giron said. “This project has allowed me to use my art to help draw attention to a very real problem in our community.”

The goal of The Hunger Free Project is to visually communicate the stories of Omahans who are food insecure. Giron, WhyArts intern James Van Ormer and Hunger Free Heartland’s Tiffany Jones conducted a series of interviews with clients of Heartland Hope Mission. Van Ormer then transcribed the interviews, and Giron incorporated their input into a series of five designs that feature cut-out shapes and hand-drawn text.

One of the five shapes created by Mike Giron for The Hunger Free Project.

The shapes – a box of popcorn, a hot dog, a bag of French fries, a pie and an ice cream cone – are iconic examples of American comfort food. “We want to impact the viewer’s sense of irony and cause him or her to consider the disparity between what they take for granted and the troubles faced by others in the community,” Giron said.

Rachel Olive, Hunger Free Heartland’s executive director, said Giron has an amazing ability to take the words people share with him and create works of art. “These pieces evoke the very real emotions that families go through every day in our community,” she noted. “The juxtaposition of the ‘American Dream’ with the state of poverty and hunger kicks you in the gut and makes you want to change our community for the better.”

The artist said he values the opportunity WhyArts has given him to work with groups of people he may not have sought out on his own. “It’s put me in direct contact with young people who are really struggling economically and socially, the elderly and those who have been labeled as ‘disabled,’” Giron said. “What I have found in each of these cases is the beauty, tenacity and courage awaiting in each person to be expressed through sharing and art. Now, not only do I see more capacity for joy in the individuals I meet, but I also feel more inclined than I had been before to draw it out.”

Up next for Giron: he’s part of “The Love Show,” an artist showcase presented by Random Arts Omaha that opens Saturday, Feb. 13, at 6:00pm at the RNG Gallery in Council Bluffs. For more information about Giron’s work, visit www.mikegiron.com.